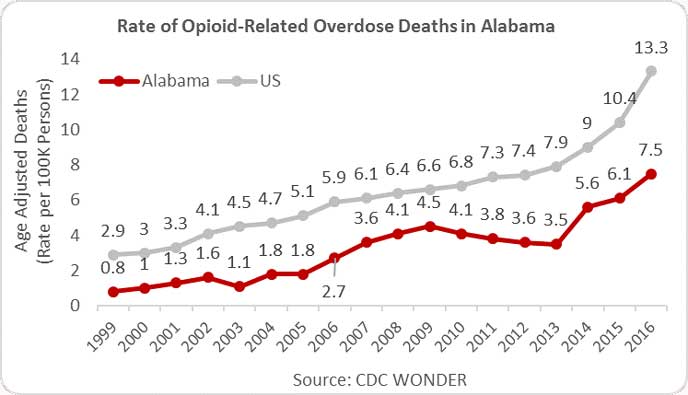 The opioid epidemic devastated Alabama, and in 2013, “Alabama providers wrote 141.1 opioid prescriptions for every 100 persons (approximately 6.8 million prescriptions)—the highest prescribing rate in the country and almost twofold greater than the average U.S. rate of 79.3.”[4]  In 2016, Alabama had the highest opioid prescribing rate in the county, with a rate of 121.0 per 100 persons.[5]  Also, Alabama’s rate of opioid-related overdoses reached 7.5 deaths for every 100-thousand persons, a substantial increase from 2015.[6]  Given the opioid epidemic’s desolation of Alabama’s communities, Alabama is the lead plaintiff in the federal multidistrict opioid litigation currently pending in Ohio.  The multidistrict litigation is comprised of state and local governments, municipalities, Native American tribes, pharmaceutical companies, pharmaceutical distributors, drug stores, and individuals.

Even with the pending federal and local opioid-related civil lawsuits, the federal government will continue to utilize the Opioid Fraud and Abuse Detection Units to pursue local pharmacists, physicians, and those who offer downstream opioid-related services.  In targeting these individuals and entities, the Units are applying a hybrid approach to tackling the opioid crisis by combining both traditional drug and health care fraud prosecutions.  From a conventional drug prosecution standpoint, prosecutors will likely factor in the following:

Next, the federal government will continue to focus on the following areas apt for health care fraud prosecutions; however, they will shift their focus to prescribing and dispensing opioid drugs:

Physicians, pharmacists, and downstream/ancillary services are unlikely to aimlessly wander into the ire of the federal government’s opioid dragnet, as there are numerous “red flags” that could potentially trigger legal scrutiny.  Moreover, medical providers should be cautious of these “red flags” and others, when evaluating whether their practices aid and abet the opioid crisis:

Some of these “red flags” provide government investigators with a starting point for gathering readily available information on a medical provider’s treatment trends and patterns.  Next, the federal government, with its increased reliance on data analytics, sifts through the voluminous patient, billing, and pharmacy records to determine what potential opioid prescription and dispensing outliers exist.[8] Based on the data, the government employs prosecutor and civil attorneys, investigators, accountants and near-limitless federal resources to analyze the statistics and determine which medical providers and pharmacists prescribe and dispense opioids at a superior volume, and are ripe for federal prosecution.

Based on the creation of these highly specialized Units, the federal government is steadily increasing the pressure on medical providers to re-analyze their prescription practices and take a more active role in tackling the opioid crisis.  Without some short-term cessation in the number of opioid-related deaths, the federal government will divert additional personnel and resources to increase the number of these Units.  Further expansion could also include encompassing the Medicare Fraud Strike Forces, tasked with prevention and combatting health care fraud, waste, and abuse in nine locations across the country, including Miami, Florida, Los Angeles, California, Detroit, Michigan, southern Texas, Brooklyn, New York, southern Louisiana, Tampa, Florida, Chicago, Illinois, and Dallas, Texas.  These interagency teams are already well versed in data analytics and have proven success in utilizing investigative sources to identify and prosecute health care fraud – one of the tenets of the Units’ hybrid approach to address the opioid crisis.

[1]  Daniel Crumby was a federal prosecutor in the Southern District of Georgia and the Western District of Texas and he represented the United States as a federal civil litigator.  He focuses his practice on federal investigations, health care fraud and abuse, medical malpractice and long-term care.  Daniel practices in Hall Booth Smith’s Atlanta office.
[2]  Andrew Knowlton is a partner in Hall Booth Smith’s Birmingham office and focuses his practice on the defense of healthcare corporations and providers.
[3]  The Alabama United States’ Attorneys retain their inherent authority to prosecute physicians and pharmacists in their respective jurisdictions.
[4] Alabama on hot seat in national opioid litigation talksAL.com,
[5] CDC Annual Surveillance Report of Drug-Related Risks and Outcomes
[6] CDC Wonder
[7]  21 C.F.R. § 1306.04
[8]  Available databases include the HHS-OIG Consolidated Data Analyst Center, Prescription Drug Monitoring Programs, Casper, Acumen, Medicare Part B, and state prescription drug databanks.