22 Feb The State-of-the-States: How State Governments are Addressing the Opioid Epidemic

“More Americans died from drug overdoses in 2016 than those who lost their lives in the Vietnam War.”1)

As of February 12, 2018, the proposed Federal Budget for FY2019 has been submitted to Congress, and it specifically addresses “Combatting the Drug Abuse and Opioid Overdose Epidemic.” The proposal allocates $13 billion to combat the opioid crisis. However, the Department of Health and Human Services, overall, is getting a 21 percent cut from 2017 levels, or a $17.9 billion decrease in FY2019. It also offers more funding for combating infectious diseases – think this year’s flu season – but also significantly cuts Medicaid spending over a ten-year period.2)

The Budget could also significantly impact historical sources of government funding for drug addiction. Addiction treatment services have been designated as “essential benefits” since the Affordable Care Act was enacted. This means addiction treatment has been covered by the ACA’s Medicaid expansion, which would inevitably be curtailed by the new Medicaid cuts.

What are State Governments Doing to Offset The Impending Federal Changes to Medicare and Medicaid?

Individual states have enacted various proactive initiatives to combat the national opioid epidemic, but concerns remain high as to how these initiatives will be funded with the staying power necessary to win the “War Against Opioids.” Some state attorneys general have claimed the necessary funding will come from the various opioid drug manufacturers.3) However, at the time of this publishing, there have been over 250 federal lawsuits4) filed against various pharma companies, without a major plaintiff verdict or settlement. And while global settlement talks began this month before U.S. District Judge Dan Polster in Cleveland, those talks could be protracted, and their outcomes remain tenuous.

Meanwhile, states are responding to the ever-changing healthcare landscape, and the need to fund opioid addiction and prevention efforts, as evidenced through their own proposed FY2019 budgets. Treating opioid addiction through behavioral health initiatives is now a commonplace proposal amongst states’ FY2019 budgets. The Kaiser Family Foundation has begun reviewing available states’ proposed budgets, and we have visually summarized the results of their efforts thus far.5)The map below captures proposals in six categories:6)

The above budgetary proposals are an encouraging example of states’ efforts to combat the Opioid Crisis through non-litigation avenues. However, the vastness of the epidemic, and Plaintiffs’ quests for redress are unlikely to curb opioid litigation in the near future. 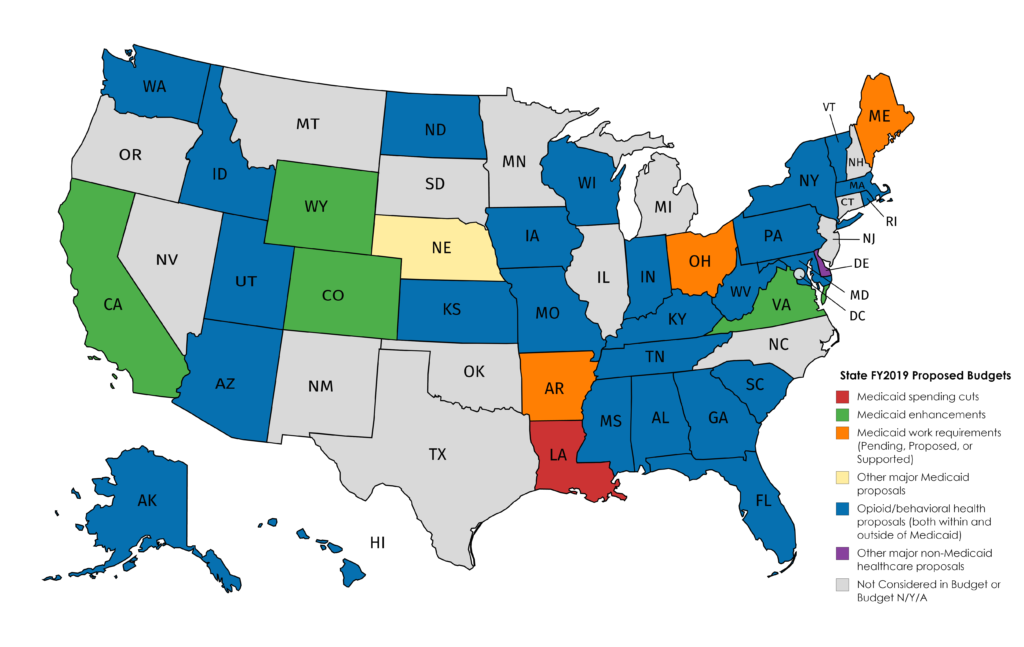